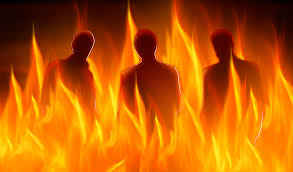 A great number of pages of the book of Revelation is about hope for the believer in Jesus Christ. There are lines that breathe words of comfort for the Christian who is able, by the grace of God, to endure to the end.

There are assurances of the reality of heaven, the dwelling place of God and His Son as well as the Holy Spirit, the angels and all heavenly hosts including the redeemed saints. And there is the beautiful hope that our Saviour will lead us there.

Yet, alas in the same book, there are visions of eternal doom in hell which will be the home of those who do not die in Christ, those who reject the salvation plan of God, or those who through careless living, lose their salvation.

This place of eternal damnation was not created for man but for Satan and his fellow fallen angels, according to Jesus Christ in Matthew 25:41. In addition to numerous pages that issue clear and distinct warning about the end-time and the events that would lead to a separation between those marked for heaven and those for hell, Revelation 14:14-20 also addresses the activities of the last days of the Great Tribulation. “And the winepress was trodden without the city, and blood came out of the winepress, even unto the horse bridles, by the space of a thousand and six hundred furlongs” (Revelation 14:20).

The treading of grapes was a symbolism for the execution of divine wrath on the ungodly (Isaiah 63:3).

At the return of Jesus Christ by the end of the Great Tribulation, all unbelievers in the world will be gathered and judged. A massive slaughter will take over at the Battle of Armageddon.

This is the reason believers should be on their toes preaching the gospel to save the lost, while at the same time asking for more of God’s grace to endure to the end. “For now is our salvation nearer than when we believed” (Romans 13:11).

THOUGHT FOR THE DAY: Show love for the lost.