The great German reformer, Martin Luther, stood his ground when he “saw the light”. A former ordained priest of the Catholic church, he was plagued with an inner demand for true righteousness.

This brought him at cross-purposes with the powers that be. He denounced everything he had believed in Catholicism. He was denounced in Rome and was accused of heretical hostility to the Pope. 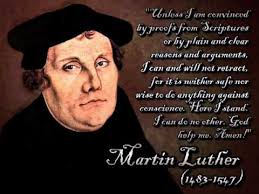 Luther made a show of his new faith by publishing three books, and dramatically severing himself from obedience to the Pope by publicly burning a copy of the papal bulletin. He sincerely believed that faith without works, without any merit, reconciles man to God and makes him good.

He believed Paul’s observation to the Romans that, “the just shall live by faith.” When summoned to appear before the German Congress at Worms in 1521 to answer charges of heresy, Luther said: “Here I stand! I cannot do otherwise! God help me.”

The book of JOHN 3:1-3, a well known personality in Israel, Nicodemus, got bothered about his life, and needed to seek help. He wanted to know the truth. He decided to consult Christ under the cover of the night. Jesus told him plainly and simply that he must be born again. There was no sand-papering!

“Jesus answered and said unto him, Verily, verily, I say unto thee, Except a man be born again, he cannot see the kingdom of God” (John 3:3).

Believers must always defend the truth when convenient and otherwise.

Though it may cost some important earthly things, yet it is better to stand one’s ground like Luther than to continue in the company of enemies of Christ.

You may be given a nickname, but nothing is more fulfilling than being branded for the sake of Christ!

THOUGHT FOR THE DAY: It is wisdom to be unflagging in the pursuit of truth.