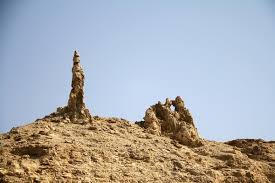 One year ago in one African country, there was a plane crash killing all the occupants. The saddest part of it all was that the plane had almost reached its destination from the capital city of that country.

The sad incident took place when those on board were anxiously preparing to make calls in a matter of minutes from there, to inform their loved ones that they had landed. Meanwhile, many of the victims had some of their relatives waiting at the airport to pick them on their arrival. It was a terrible incident.

So, it was for Lot’s wife, an unforeseen and immediate extinction from the face of the earth.

The sign-seeking Pharisees were asking the Lord about when the Kingdom of God should come. In their ignorance, they knew little or nothing about the various stages of the Kingdom.

That is, the present spiritual aspect of the kingdom in which Christ reigns in the heart of every born again Christian; the future kingdom at the time of His millennial reign when the Lord shall reign physically on earth for a period of one thousand years of uninterrupted joy, peace and prosperity and the eternal kingdom of Christ when the kingdoms of this world  become the kingdoms of our Lord, and of His Christ; when He shall reign for ever and ever (Revelation 11:15b).

The Lord told these religious leaders what the condition of the world shall be at the time of His coming. Wickedness, worldliness and wantonness shall be prevalent just as it was in the days of Noah and in the days of Lot.

The lust of the flesh, the lust of the eyes and the pride of life brought destruction upon the people through the flood and fire in the days of old.

Lot’s wife was lost through lust. The angels of mercy held her by the hand and brought her out of Sodom but she looked back, contrary to divine instruction and she became a pillar of salt!

In spite of all the special privileges she enjoyed, she was lost. She never knew trouble was lurking around for her. She looked back and her journey ended.

The coming of the Lord is imminent. Everything happening in the world today points to the fact that the time is short.

The necessity of salvation from sin and holiness of life cannot be over-emphasized therefore.

THOUGHT FOR THE DAY: Trusting in Jesus, that is all.